There’s not much to write about for today – we had brekky in the Café attached to the hotel, where I was surprised by really good coffee – 8/10. It was accompanied by “eggs with style”… and bacon. Bacon never goes out of style.

Then it was back to the room to do the very last bits of packing we had finished the night before. We left home with two half-empty bags … suddenly we find ourselves returning with four very full ones. We also left our standard koala calling card upon checking out …

This time, I overpacked. You know how the rough guide is “pack your bag then take half of the stuff out” … it’s sound advice, which I didn’t really follow. I packed a pair of pants, a pair of shoes and a shirt that just spend six weeks in a suitcase.

We used good old “dial7” car service to get us to the airport. So called as their phone number is basically keep hitting 7 until someone answers. Leaving New York… well, I know I’ll sound like a spoiled brat here, but leaving … it sucks. There are more shows to see, more places to go, things to do … but I guess pretty much everyone on a holiday kinda wishes it could go on forever.

It took about an hour to get the airport – the first half of that was just getting off Manhattan. Our driver, like all in New York, use the horn as a kind of local language. Go, stop, wait, move you idiot!, there are beeps galore but it all seems to mostly work.

Check in at the Asiana desk was great. Very friendly, and they suggested moving us up a row as the seats had “better privacy”. They also noted that there would be a baby at the back of business class, “just so you are aware”. I can’t get upset at crying babies on planes – there’s not much anyone can do about it, but interesting that they went to the trouble of pointing out.

We hung out in the Swiss Air lounge which was ok, the only thing it really lacked was power outlets. It had nice cookies, and the machine-made cappuccino wasn’t horrible either.

A few hours passed by and eventually it was time to board our big A380. It’s always nice to “turn left” on boarding – but I junk that’s mostly because the upper deck boarding door is not quite up the front of the plane.

The seats are big enough and comfy enough, and we finally realise that the aforementioned “privacy” meant “from each other” – there’s a metre or so of desk/storage between our seats in the middle part of the plane. But not to worry, we can still smile and wave 🙂 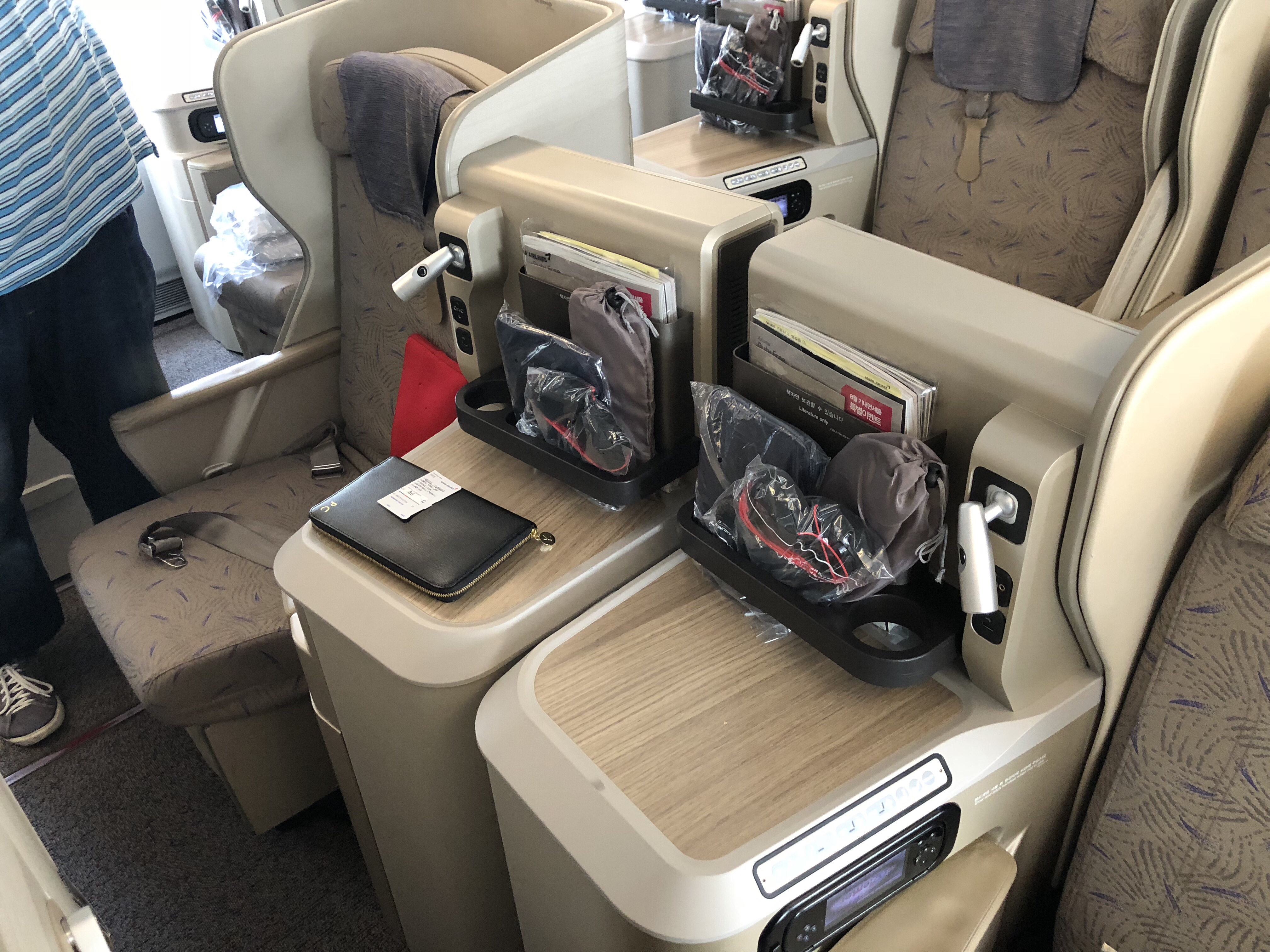 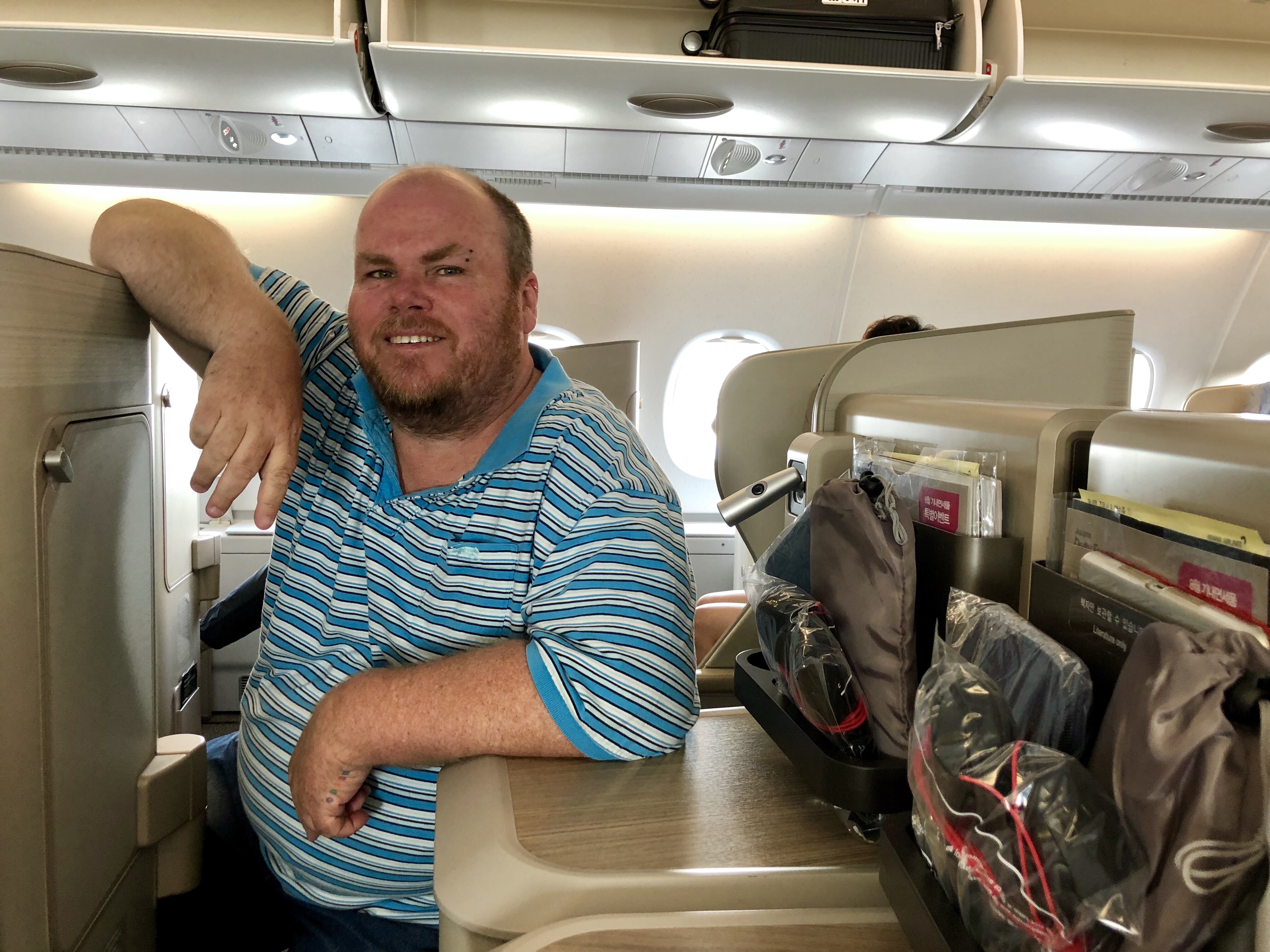 There’s a reasonable size tv screen, a nice big fold down table, and fun stuff like a pair of slippers and a little amenities kit. The headphones are comfy, but not noise-cancelling – i guess it doesn’t matter as much in an A380. Maybe it’s because we’re sitting in the middle but this time I noticed that the A380 does seem quieter than most planes – previously I’d always thought it about the same.

The cabin crew are all very polite and professional, and the food is really impressive. Fancy appetisers, and a really flavoursome Korean bibimbap for mains. It was delicious. Note to self: have bibimbap more often.

The first leg of the flight is 13 hours, the second one around 10 hours. I’ll try and stay awake on this first leg, then sleep through the second one as it arrives in Sydney around 7:30am. It kinda feels like we’re being cheated to leave New York on Friday morning then boom it’ll be Sunday morning when we get home – but guess we had to pay back our 36-odd hour long July 4 eventually.

At the time of writing, there’s still quite a few hours of his first leg left, so time to watch a few more movies – there’s plenty on the plane, haven’t even had to dig out the iPad yet.

The hours passed and eventually we landed – a very nice, uneventful flight. Very happy with Asiana Airlines so far.

Just a few hours to wait in the Asiana lounge at Incheon, then we’re off, the fi al leg … next stop, Sydney!

One thought on “Start spreading the news…”